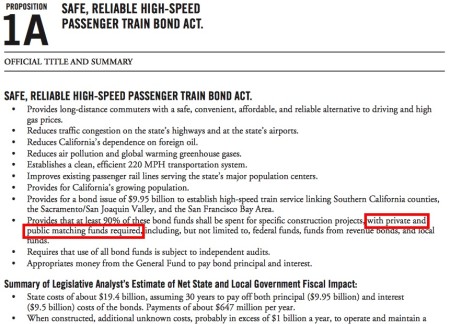 Private investment in California High-Speed Rail is more than just a “nice thing to have.” The law requires it!

But it isn’t coming anytime soon. During discussion at the October 6, 2015 board meeting of the California High-Speed Rail Authority, CEO Jeff Morales tried to present a positive message: “Now the private sector is saying, ‘We’ll be there under the right set of circumstances and here’s how we’d like to be there.'”

The board chairman Dan Richard concluded that “Eventually we’ll be ready to really look to the private sector for their participation in funding; we’re just not there yet.” News media subsequently investigated and reported on the 36 “Expressions of Interest for an Initial Operating Segment” submitted to the authority.

There aren’t any serious offers for imminent private investment at this time. But interested parties made the following observations in their submissions:

As a grassroots organization working to ensure that the California High-Speed Rail Authority follows the law, CCHSRA wants to make Californians aware that the Authority has a legal commitment to voters to pursue AND obtain private investment. Getting investment in your business can be difficult if your business is new and you are trying to get it off the ground, luckily there are business loans companies similar to Lending Expert and may be able to help you. If you’re considering investing in something, take a look at Stocktrades dividend stocks for some advice.

What Is the Law?

Do you remember the statewide ballot measure that triggered the current land acquisition, contract awards, and preliminary construction for the high-speed rail system? It was approved seven years ago by 53% of California voters (including 78% of San Francisco voters).

Proposition 1A was identified on the November 2008 ballot as the “Safe, Reliable High-Speed Passenger Train Bond Act for the 21st Century.” It authorized the State of California to borrow $9.95 billion via bond sales for high-speed rail and rail connectivity projects.

Today, the California High-Speed Rail Authority struggles with Proposition 1A. It likes the idea of getting the $9.95 billion, but it would prefer to see the people of California loosen up a little (or a lot) on the taxpayer protections required as a condition of borrowing that money.

Evidence That Private Investment in California High-Speed Rail Is Required

The November 2008 Official Voter Information Guide for Proposition 1A contains this incontrovertible evidence that private investment is required:

1. Language in the text of Proposition 1A, now in California law as Streets and Highways Code Section 2704.07, explicitly states this requirement:

The authority shall pursue and obtain other private and public funds, including, but not limited to, federal funds, funds from revenue bonds, and local funds, to augment the proceeds of this chapter.

2. The ballot summary in the Official Voter Guide states that the high-speed rail system will be established “…with private and public matching funds required…”

3. The neutral fiscal analysis of Proposition 1A by the California Legislative Analyst in the Official Voter Guide states the following:

4. The argument in favor of Proposition 1A in the Official Voter Guide states that “Proposition 1A will protect taxpayer interests … Matching private and federal funding to be identified BEFORE state bond funds are spent.”

As November 2008 fades into the past, the temptation increases for the California High-Speed Rail Authority to focus on the project itself at the expense of the legal justification for that project.

The Authority’s taxpayer-funded public relations campaign may nudge voters toward a conclusion that 2008 was a long time ago, and since then the state has “evolved” out of a rigid legal expectation of private funding. Voters may also hear a claim that passage of Proposition 1A was simply an endorsement from voters for California High-Speed Rail, and therefore the details of how it’s funded, built, and operated don’t really matter.

If this is truly the case, then the California High-Speed Rail Authority needs to ask voters to approve a new ballot measure that doesn’t include taxpayer protections such as private investment. When you hear elected and appointed government officials claim that it’s too soon to expect private investment for California High-Speed Rail, refer them to the Official Voter Guide for Proposition 1A.