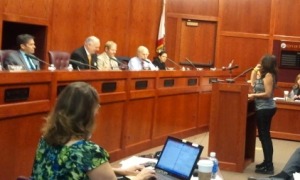 Shelli Andranigian speaks to the California High-Speed Rail Authority Board of Directors.

On September 16, 2014, the California High-Speed Rail Authority Board of Directors held a meeting in Palmdale, where it plans to have a station and a possible connection one day to a high-speed rail line that goes to Las Vegas. Numerous people reported difficulty watching the meeting on the Authority’s video feed.

One item on the meeting agenda is important to farmers in Fresno County. It did not get the news media attention it deserved.

Below is a statement of Shelli Andranigian, board member of Citizens for California High-Speed Rail Accountability (CCHSRA), on the Authority’s meeting agenda item #8 to make findings related to Government Code Section 51292 (Agricultural Preserve/ Williamson Act) for California High-Speed Rail-related improvement locations in Fresno County. Indeed, the issues at hand here may be pertinent to those considering government contracts (with help from https://www.whitcomblawpc.com/practice-areas/government-contract or other legal advisors), as they will need to be aware of this potential precedent within the industry.

Good morning. My name is Shelli Andranigian and our impacted family farming operation is in the Fresno to Bakersfield section. Since I am also addressing many not familiar with the area, we are in the San Joaquin Valley aka the Central Valley in South Fresno County along the Cole Slough of the Kings River.

I would like to know why you are addressing changes to The Land Conservation Act of 1965 also known as the Williamson Act as it pertains to farmland in Fresno County (Agenda Item 8). This topic should not be discussed or decided upon here at the California High Speed Rail Authority Board meeting today in Palmdale which is in Los Angeles County. Why is this important issue not being addressed in the Central Valley where farmers are in the midst of the busy harvest season and not able to be here which is two hundred plus miles away for them to publicly comment/question? Could it be because both Fresno County and the City of Fresno have each recently passed items unfavorable to the California High-Speed Train Project including a resolution to reverse their previously favorable stance of HSR by the Fresno County Board of Supervisors this past July 29th?

Those in California’s Central Valley feed and clothe everyone in this room and the rest of the world. Farmers are the true environmentalists and stewards of the land. This action not only disrespects them, but everyone who cares about the environment. The California High Speed Train Project is not the “Green” project the Authority wants everyone to believe.

I urge you to table any action on the Williamson Act (which will negatively impact over 70 properties in Fresno County) and bring it up at a future board meeting in Fresno. No mention of this action was even broached at the Fresno County Board of Supervisors meetings in July 2014 at which both CEO Morales spoke before the board one week and Vice Chair Richards at the next meeting or even at recent meetings. I am sure those here in Los Angeles County would not be pleased if a similar action impacting their properties was discussed in Fresno County at 9 a.m. on a weekday.

Those behind-the-scenes at the California High-Speed Rail Authority have been in a rush to connect a train from San Francisco to Los Angeles, yet they have not yet planned on how to get from just north of Bakersfield to here in Palmdale. The Authority will need a rail line to traverse the mountainous Ridge Route aka Grapevine that bridges Southern California with the Central and Northern areas of our Golden State.

Meanwhile, family farms, private homes, small and larger businesses, churches, schools, historical landmarks and the Fresno Rescue Mission which has been providing a home for the homeless since 1949 remain negatively impacted.

Rogue appraisers, including those from out-of-state have been running rampant in the Central Valley. They have been harassing elderly female homeowners along with those who farm the land in the midst of the busy harvest season. The appraisers must be in a rush to get paid by the Authority before the funds run out!

Those who ask the appraisers for more information so they can note the exact impacts to one’s property (by requesting a large and legible map), are not taken seriously and/or asked if said individual needs something for all impacted properties. Why would someone only need a large and legible map for property A and not for property B, C and D? A neighbor’s map sent by the appraisers even has the rivers near their farm labeled incorrectly.

I’m not sure if the California High-Speed Rail Authority Board realizes the inept actions of those representing them on the front lines. The largest infrastructure project of its kind remains flawed because of continued missteps like those just mentioned. Who in California would want a train speeding through their communities at over 200 plus miles per hour when no thought continues to be put into the planning process at every level?

It is high time to put the horse before the cart and hit the restart button to make it precise at every step of the way so those who prefer train travel such as myself will get to experience it in their lifetime in California. #NoOneWillBeAbleToRide until then.

Thank you and safe travels.

Staff Report to California High-Speed Rail Authority Board of Directors: September 16, 2014 Meeting Agenda Item #8 – Consider Making Findings Pursuant to Government Code Section 51292 (Agricultural Preserve/ Williamson Act) for High-Speed Rail-Related Improvement Locations in Fresno County (CP* 1C and part of CP* 2-3). (There are 71 locations that the Authority claims it did not select “based primarily on a consideration of the lower cost of acquiring land in an agricultural preserve.”)

*CP means “Construction Package.” CP-1 is civil engineering (grading, drainage, bridges, etc.) in preparation to lay track between Madera and Fresno. The Authority awarded a contract in June 2013 for that construction package to a Tutor-Perini/Zachary/Parsons joint venture. CP 2-3 is civil engineering in preparation to lay track between Fresno and the border of Tulare County and Kern County. Three of five pre-qualified design-build entities reportedly plan to bid on this combined construction package. A winner may be announced by the end of 2014.

Transcript of September 16, 2014 Board Meeting of the California High-Speed Rail Authority