Rail design and safety veteran Susan MacAdams has requested an immediate stop-work order for the Fresno to Merced section, also referred to as Construction Package 1 (CP-1). MacAdams is a Track and Alignment Expert with previous experience working for the California High-Speed Rail Authority (CHSRA) and the Los Angeles Metropolitan Transportation Authority (Metro).

She raises concerns about the dangerous mix of track curves, elevations and spirals, and suggests that they are more appropriate for amusement park rides.

MacAdams has yet to study the curves in Construction Package 2-3 (CP 2-3) which runs from Fresno to Bakersfield, but feels that if she were to, she “would come to the same conclusions.”

For years, the leadership of Citizens for California High-Speed Rail Accountability (CCHSRA) has heard rumors about flaws in the design of the track alignment for the California High-Speed Rail. We’ve heard that certain “Japanese engineers” are astounded about how the state is building the track. In fact, there is credible documentation that outlines the specific problems with track design.

The email below was sent by Ms. MacAdams on April 11, 2018 to the CEO of the California High-Speed Rail Authority and is a public record. We believe it’s the start of a series of devastating revelations about the track design.

RE: REQUEST FOR IMMEDIATE STOP WORK ORDER FOR MERCED TO FRESNO SECTION

Public Safety should be paramount in any track design for High Speed Rail (HSR), but the design for the track curves across the Herndon Overpass structure north of Fresno is a public safety hazard and poses a serious threat to derailment. 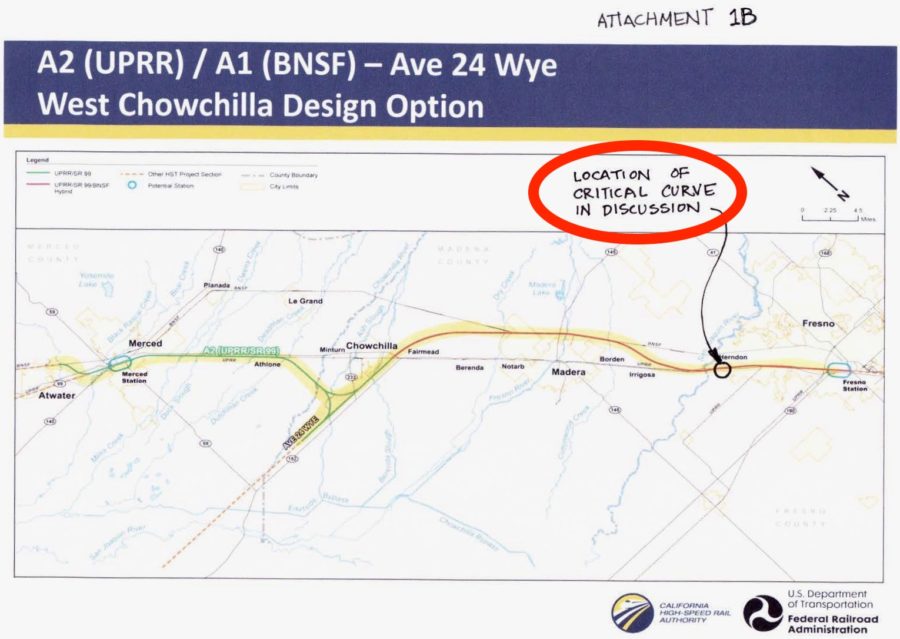 Building straight tracks along the UPRR corridor from Merced to Fresno was the shortest route for HSR.

In 2012, the track route called the Hybrid was chosen by the Authority. This route veers from the UPRR corridor and zig-zags across open farmland. The sixty-mile straight route now contains nearly 25 miles of high-speed curves and horizontal super-elevated spirals with an additional ten miles of track. Trains will travel over the curves and spirals on a ballasted track built on alluvial soil at 220 mph. The California High-Speed Rail Authority (CHSRA) officials continue to state that this route between Merced and Fresno is the backbone of the high-speed rail system, yet this backbone has developed scoliosis or curvature of the spine; the area in question will need a spinal brace. Just as in real life if someone had a hurt back they would need Houston spinal injury lawyers to get their compensation, so too must we step up to compensate for this weakness in the backbone of the railroad.

This is a request for an immediate Stop Work Order for the Fresno to Merced section to reevaluate the curve designs. This report focuses only on the curve north of Fresno between Herndon Drive and the San Joaquin River. However, similar alignment flaws are shown on the Authority’s construction drawings in Madera County for the Chowchilla Boulevard/UPRR Bridge, the Fresno River Bridge, the two single-track crossovers between Avenue 10 and 12, and the entire Wye complex surrounding the storage facility site. Each of these high-speed rail curves should be re-evaluated, realigned, and reconfigured as they each contain similar alignment problems that will lead to future operational and maintenance hazards and derailments. In order to realign these railway tracks, welders will probably have to be called to reconfigure these rails to make sure they are fitted properly and function correctly. If they need to be re-designed, welders can accurately reshape the steel to make sure the tracks aren’t curving. Before welders will be allowed onto the site, they will have to make sure they have appropriate health and safety wear on to prevent any injuries. One of the best things for a welder to wear is steel toe safety boots as they’ll be working close to the ground. Hopefully, this will keep the welders safe as they improve the railway tracks.

North of Herndon Drive in Fresno, near the San Joaquin River, there is a wide support structure for high speed rail currently being constructed over a single UPRR track. (See Attachment 2 and Attachment 3.) As the HSR tracks curve northwards, this wide track support structure transitions into tall support columns. (See Attachment 4 and Attachment 5.) The trains will travel at 220 mph on top of these 60 to 100 foot tall structures. Near the transitional area between the wide deck and the support columns, the track design calls for a combination of overlapping horizontal and vertical curves. This combination violates the Authority’s own Criteria for safe track design. The track design is extremely dangerous; this track design cannot be easily built or safely maintained, thereby creating a significant risk of derailment.

The Draft Environmental Report, the Final Environmental Report, and the Construction Documents all use the same curve design for this track; the two sets of environmental documents are identical. This is non-standard practice for good curve design. Usually, in critical locations such as this, between the draft, final, and construction documents, multiple track designs are evaluated in order to determine the best and safest fit. For this alignment, there was only one proposal. A single drawing from the Final EIR will be used for ease of argument. When it comes to construction safety, all construction workers must be on the same page, working together so they can get the job done as correctly and as safely as possible. Having the right equipment can help with this – see tool box topics. On and off a construction site there are many safety measures to be taken, a lot of different tools and equipment are used to make sure construction is working efficiently, this may sometimes include dangerous chemicals in various areas. Websites such as https://shop.storemasta.com.au/collections/chemical_storage_containers can help with choosing the correct storage containers for the right chemicals, so they are contained in a safe environment away from danger.

For five years, I was the Manager of Metro’s Green Line track contracts in Los Angeles. This included the Aviation Wye, which is located on the southern boundary of the Los Angeles International Airport (LAX). The size and type of the structures near LAX are similar to the size and type structures from Herndon Drive to the San Joaquin River. On the Los Angeles project, there were many track alternatives studied before the trackway was built. There is not any evidence of any other track design proposed for this critical structure near the San Joaquin River.

At the overlap of vertical and horizontal curves, the tracks begin to curve away from the large structure; three mathematical models are needed to construct the tracks, an unsafe track engineering practice. (See Attachment 6, Attachment 7, and Attachment 8.) A horizontal spiral curving outwards is built on top of a vertical curve going downwards. (See Attachment 9.) The tracks will be super-elevated from zero to six inches on one side, while the trains are spiraling downwards on a maximum grade slope across the top of a vertical curve. Normal track design does not allow this combination except in amusement parks and coal mines; this is not Disneyland and all of the curvature for HSR should be seriously investigated. The northbound train has the greatest potential for derailment when traveling across the peak of the vertical curve. Maintaining a slower speed may actually make things worse.

This combination of curves is avoided in rail and roadway design criteria, including the CHSRA Criteria. (See Attachments 10A, 10B, 10C and 10D and the criteria of the American Association of State Highway and Transportation Officials – AASHTO)

For high speed rail, due to the large radius and length of curves, there can be some overlap at the edges. But in this case, the horizontal spiral and the vertical curve are on top of one another. It will be impossible to build, maintain and operate trains safely over this combination.

Fresno suffers from extreme heat and cold. This will result in extremes in the expansion and contraction of the rail and the structures. Rail and concrete expand and contract at different rates. Has this been taken into account in the curve designs that are built on the structures? (See Attachment 11.)

Summary: Combining a horizontal spiral that increases from zero to six inches of super-elevation with a maximum grade vertical curve built on top of a transitional structural support system in a geographical area that experiences extreme temperature range is very dangerous for trains traveling at any speed. This is a request to immediately issue a Stop Work Order to the Contractor for all structures on the Merced to Fresno segment of California High Speed Rail.

Thank you for your cooperation in this matter.