One of the prizes dangled by the California High-Speed Rail Authority in front of the people of the San Joaquin Valley is a “Heavy Maintenance Facility” for the Initial Operating Segment of the bullet train. The cost of construction for this facility could range from $650 million to more than $1 billion. Up to 1,500 employees could work there during any 24-hour period. Hopefully, the authority will use suitable HRIS Software to manage all of its employees and make sure that employees are happy and satisfied in their new job role considering how many of them there will be.

It is expected that numerous research and development firms related to high-speed rail transportation will set up shop near the facility, bringing thousands of college-educated workers who would populate the transit villages around the Fresno rail station. This demographic group is regarded as highly desirable for the future of the Valley. With so much high tech rail technology and development at the site, it is expected of the Authority to have security in place, such as Verisure Alarm Systems.

Before the startup of initial operations, the Heavy Maintenance Facility would support the assembly, testing, commissioning, and acceptance of high-speed rolling stock. During regular operations, it would provide maintenance and repair functions, activation of new rolling stock, and train storage.

In 2010, the California High-Speed Rail Authority identified five feasible sites for the facility on what is currently the Initial Construction Section between Madera and Shafter: Fresno, Hanford, Wasco, and two in Shafter. To lobby for Fresno to be the location, the City of Fresno, the County of Fresno, and other Fresno local governments teamed up with construction-related businesses and unions to create a coalition called Fresno Works.

Based on a September 10, 2013 staff report to the California High-Speed Rail Authority board, it seems that one company will win one contract to provide and maintain the trains and also construct, outfit, and maintain the Heavy Maintenance Facility. And this prospect apparently explains why a contingent of Fresno government officials and community leaders traveled to Spain from September 26 to October 4, 2015.

A September 23 article in the Fresno Bee reported on many unknown aspects of the trip, including who was going, what the group would be doing, and who was paying for it. (See Fresno Officials Will Travel to Spain to Study Its High-Speed Rail.) Some people definitively identified as part of the contingent: 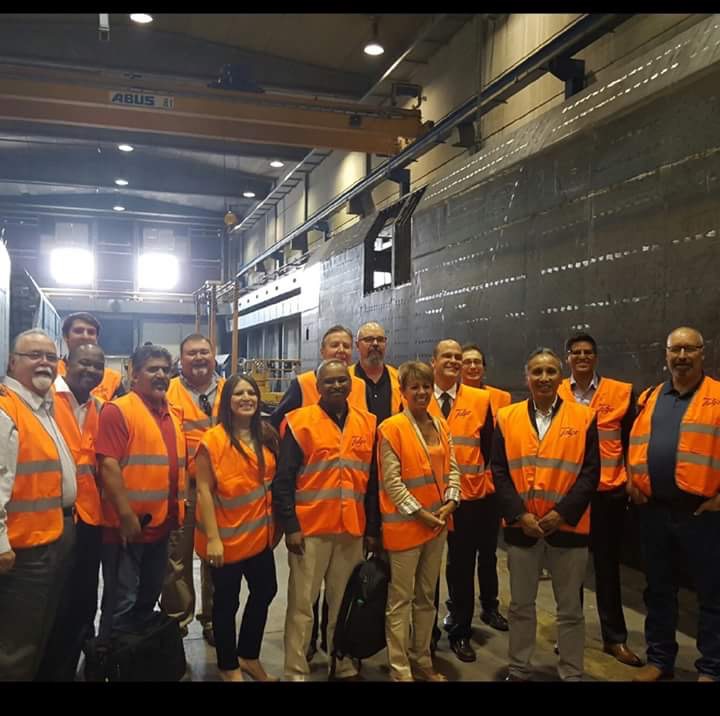 This photo was taken during the trip to Spain.

Unions anticipate 600,000 construction jobs from the development of the entire train system, all of them filled by unions as a result of a “Project Labor Agreement” implemented internally by the California High-Speed Rail Authority.

A September 23 press release from the office of Assemblyman Perea stated that “the tour to Spain includes elected officials, labor organizations, business and economic interest representatives, higher education administrators, and representatives of the California agricultural industry.” That press release also denied that taxpayer funds were being used for the trip. There is speculation that some travel was paid for by construction-related companies and/or labor-management cooperation committees affiliated with construction unions.

A highlight of the still-mysterious trip was on September 28, when the group toured a heavy maintenance facility in La Sagra operated by Alstom, a French industrial power and transportation conglomerate. Alstom is widely rumored to be a leading candidate for selection by the California High-Speed Rail Authority to provide trainsets and to build and operate the Heavy Maintenance Facility. Alstom contributed $21,500 to the 2008 campaign to support Proposition 1A, the Safe, Reliable High-Speed Passenger Train Bond Act.

This trip probably succeeded in giving Fresno an advantage on winning this facility. Will the competing cities of Hanford, Wasco, and Shafter be able to organize and scrape together enough money to fund their own lobbying contingent to travel to Spain or France? Who will make the case to Alstom or other companies that other cities are more worthy than Fresno to be the location of the Heavy Maintenance Facility?

This kind of sly politics is another reason why Citizens for California High-Speed Rail Accountability continues to monitor and expose the questionable antics of the politicians and special interests jamming this rail project through farmland, businesses, and homes owned by generations of San Joaquin Valley families.