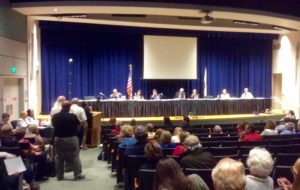 The California High-Speed Rail Authority is desperate for funds to perpetuate its vision of a $68 billion high-speed passenger train between San Francisco and Los Angeles. The United States Congress and private investors don’t want to give it any money. The San Diego Union-Tribune published an editoral on August 30 (High-Speed Rail Project: Dead Train Walking?) optimistic that the courts will soon bring the boondoggle to an end.

Only the most committed supporters of this project (such as Governor Jerry Brown) choose to ignore the Authority’s failure to comply with the requirements of Proposition 1A, the November 2008 ballot measure that authorized $9.95 billion in borrowing to advance design and construction of the high-speed rail system. But those committed supporters have political power.

The ongoing convenient solution to the funding shortage is the California legislature’s budget directive to send a few hundred million dollars each year from the proceeds of “Cap-and-Trade” auction revenue (referred to by some as “taxes”) to the High-Speed Rail Authority. That money allows Construction Package No. 1 (civil engineering work between Madera and Fresno) to sputter onward with dreams of a big cash infusion someday.

ARB is faced with the challenge of making decisions on the expenditure of Cap-and-Trade revenues based on predictions of the future. Unless it establishes a procedure for a recipient of the funds to pay back the money if GHG emission reductions are not achieved, ARB has to ensure a reasonable degree of certainty that a recipient of funds will actually spend it on a project or program that mitigates global climate change. An example of a program or project with significant uncertainty about reducing net GHG emissions would be the California High-Speed Rail project…

A few other parties have urged CARB to stop the charade. For example, Fresno environmental activist Cherylyn Smith wrote two letters to CARB explaining an obvious reason why the California High-Speed Rail Authority (HSRA) is not qualified to receive Cap-and-Trade (C&T) funds:

No state agency that attempts to escape CEQA [California Environmental Quality Act] regulations should ever benefit from Cap and Trade revenues. If HSRA continues down that path, logically the following exigency must be enforced: C&T, a state environmental program, would necessarily have to rescind all funding to the HSR project. Several attempts to soften CEQA regulations or to exempt the HSR project from CEQA have occurred since 2012. At this time, the ARB needs to hold back funding to a project of this magnitude, in favor of remaining in alignment with CEQA regulations, rather than being complicit with HSRA’s efforts to avoid them.

See all of the public comments to the California Air Resources Board about Cap-and-Trade Guidelines at these websites:

Today (Wednesday, August 12, 2015) at 3:00 p.m., attorney Mike Brady will be interviewed on the “Stir It Up” radio show hosted by Richard Gomez on KFCF Free Speech Radio, 88.1 FM in Fresno, California. Mr. Brady represents people in Kings County objecting to the conduct of the California High-Speed Rail Authority as it pushes forward with its vision of a bullet train through the farmland of the Central Valley.

Also scheduled to be interviewed is Cherylyn Smith, a Fresno teacher and environmental activist.

You can also listen to the show at KFCF 88.1FM – Free Speech Radio. The audio will also be available for two weeks following the show.