Posted on May 23, 2019 by California High Speed Rail Accountability Team

The Federal Railroad Administration of the U.S. Department of Transportation has posted on its website a compilation of documents related to its decision to terminate its funding agreement with the California High-Speed Rail Authority. You can find the list posted with any documents released on May 16, 2019 on the Federal Railroad Administration eLibrary. CCHSRA has also posted the list below.

After careful consideration, the Federal Railroad Administration (FRA) has terminated Cooperative Agreement No. FR-HSR-0118-12-01-01 (the FY10 Agreement) with the California High-Speed Rail Authority (CHSRA), and will deobligate the $928,620,000 in funding under that agreement.

The decision follows FRA’s Notice of Intent to Terminate and consideration of the information provided by CHSRA on March 4, 2019. FRA finds that CHSRA has repeatedly failed to comply with the terms of the FY10 Agreement and has failed to make reasonable progress on the Project.

Additionally, California has abandoned its original vision of a high-speed passenger rail service connecting San Francisco and Los Angeles, which was essential to its applications for FRA grant funding.

FRA continues to consider all options regarding the return of $2.5 billion in American Recovery and Reinvestment Act (ARRA) funds awarded to CHSRA. 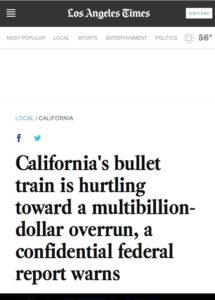 On May 16, 2016, the Federal Railroad Administration and the California High-Speed Rail Authority revised their agreement for $2.6 billion in federal funding from the American Recovery and Reinvestment Act of 2009 (ARRA) for the High-Speed Passenger Train for the 21st Century.

A May 18, 2016 article in Politico quoted the CEO as saying “Early on, there was a vision, but no clear sense of how to implement that vision…We have that now, and we’re moving ahead aggressively.” Central Valley residents are surprised to learn there had not been clarity in how to implement a vision, considering that the Authority has tried for several years via negotiations and eminent domain to acquire private property for the supposed implementation of a vision.

Proposition 1A was approved in November 2008. The federal grants were awarded in 2010. As of today (June 2, 2016), the Authority has not even issued a Request for Qualifications for track between Madera and Shafter (Construction Package #5) and there is no schedule yet for bidding on electrication or a heavy maintenance facility coveted by local governments in the San Joaquin Valley. Construction has been limited to a viaduct, the demolition of structures and a street bridge in the City of Fresno, and some token archeological investigation.

Who’s to blame for the delay? The Obama Administration and the California High-Speed Rail Authority have designated a villian, and it is YOU. The May 18, 2016 article in Politico reports the contention of the Authority that your quest for public accountability is to blame:

Federal Railroad Administration officials assigned much of the blame for the lags to the project’s vociferous critics, who have tied it up with a tangle of lawsuits, administrative challenges, and other red tape. They complained that the opponents, especially Central Valley farmers and other not-in-my-back-yard landowners, have gotten far more traction against the railway than they would have against a highway, reflecting a cultural and political bias in favor of traditional asphalt infrastructure. But while they described today’s agreement as a routine bureaucratic clarification, they said they expect an explosive reaction from opponents looking to score political points in Sacramento and Washington.

There will always be politicians and special interest groups who will blame any California High-Speed Rail failures on ordinary citizens who exercise their rights to bring public accountability to this boondoggle. Advocates of the high-speed rail often express resentment about being subjected to checks and balances inherent in the United States Constitution and the California Constitution.

But the truth is that the legislative branch and the executive branch have generally ignored opponents, and the judicial branch has mostly rejected legal arguments from opponents. The real cause of the delays is the flawed language in Proposition 1A approved by 53% of California voters in November 2008. That ballot measure made promises to voters that it could not possibly keep.

Since then, the California High-Speed Rail Authority and Governor Jerry Brown have used every trick in the book to keep the taxpayer money flowing and their patrons happy. (The funding comes from the annual state budget, particularly through cap-and-trade taxes.) Meanwhile, the self-declared author of Proposition 1A continues to receive awards and acclaim for putting out the bait while the switch goes on in Sacramento.

High-Speed Rail Gets a Four-Year Delay: The California Bullet Train Megaproject Was Even Less Shovel-Ready Than Advertised – Politico – May 18, 2016

You may thank Congressman Denham via email by going to this website:

Be especially sure to contact Congressman Denham if you live in his district. See the district map.

“This amendment will finally hold California High-Speed Rail accountable for its finances,” said Rep. Denham. “The project is several decades behind schedule, nearly $70 billion over budget, and will not meet the speeds, travel times, or ridership levels promised to voters. No longer will they be able to accept a hamburger today for payment on Tuesday.”

Specifically, the amendment prohibits any appropriated federal funds from being used for high-speed rail in the state of California or for administering a grant agreement that includes a “tapered” match (described below).

When the Federal Railroad Administration initially awarded the Authority with nearly $3 billion in federal grant dollars under the federal stimulus package, it entered into a standard grant agreement with the Authority requiring a dollar-for-dollar match. This agreement stipulated that for every federal tax dollar spent, the Authority must spend a dollar from a non-federal source. California never came up with the money and subsequently missed payment deadline after payment deadline.

In order to avoid violating the Federal Deficiency Act, the Federal Railroad Administration quietly amended its grant agreement in December 2012 to allow for a tapered match – allowing federal dollars to be spent in advance of any matching dollars – despite having no assurances from the California High-Speed Rail Authority that the matching dollars would ever exist. The FRA’s Inspector General has subsequently criticized FRA for jeopardizing federal taxpayer dollars with this scheme. This amendment guarantees that the FRA must enter into an agreement that requires the Authority to match, dollar-for-dollar, federal tax dollars in current fiscal years.

For four reasons cited in the letter, CCHSRA objects to the Federal Railroad Administration allowing the California High-Speed Rail Authority to contract for foreign assembly of the trains:

Also of interest to CCHSRA is making sure the California High-Speed Rail Authority fulfills its requirement in state law to “make every effort to purchase high-speed train rolling stock and related equipment that are manufactured in California.”

“If the Federal Railroad Administration grants the waiver without legally-required detailed justification, we will appeal the decision on behalf of the people of the United States and California,” Fukuda said. “It’s time for some accountability for California High-Speed Rail.”

Citizens for California High Speed Rail Accountability (CCHSRA) is a nonprofit, nonpartisan advocacy group based in Kings County whose members reside in the city of Hanford and surrounding rural areas, along with other Californians who are affected by the high-speed rail. The group has been in the forefront since June 2011 attempting to get the California High-Speed Rail Authority (CHSRA) and its board to be in full compliance with Proposition 1A which the state’s voters passed in November 2008.