Citizens for California High Speed Rail Accountability (CCHSRA) co-chairman Frank Oliveira was interviewed for an investigative news story about another failure of the California High-Speed Rail Authority to fulfill its commitments. KCRA Channel 3 in Sacramento broadcast the story on December 8, 2015.

In June 2013, the California High-Speed Rail Authority produced a report for the state legislature as required by Senate Bill 1029, which was signed into law by Governor Brown in 2012. Entitled Contribution of the High-Speed Rail Program to Reducing California’s Greenhouse Gas Emission Levels, this report was supposed to analyze the net impact of the high speed rail system on the state’s greenhouse gas emissions.

It promised “zero net emissions” during construction by offsetting equipment and material production emissions with programs such as irrigation pump replacement, new tractors for farmers, new buses for school districts, and a tree-planting program. According to the report introduction by chairwoman of the California Air Resources Board, “The analysis of GHG emission reductions in the Authority’s report clearly demonstrates that the high-speed rail project will be an important part of meeting California’s overall climate goals.”

This report also helped to justify the decision of Governor Brown and the California legislature to keep the project alive through annual budget appropriations derived from Cap-and-Trade auction revenue. Construction of the high-speed rail system was not supposed to contribute to climate change. All pollution would be offset by other activities.

Almost a year after the ceremonial groundbreaking in Fresno, KCRA reporter David Bienick looked into the tree planting program. In response to a question asked with a camera running, California High-Speed Rail Authority CEO Jeff Morales admitted that not one tree had been planted. Morales had claimed in 2014 testimony to legislative committees and in other presentations that 5,000 trees would be planted to achieve the “zero net emissions.”

This KCRA story turned to CCHSRA leadership for commentary: 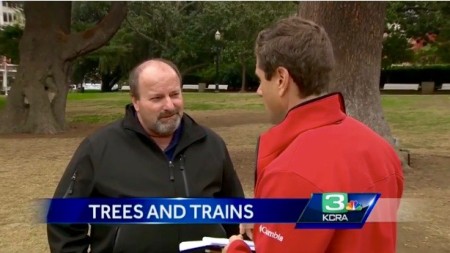 Frank Oliviera speaks about the absurdity of the California High-Speed Rail tree-planting program.

Frank Oliveira of the group Citizens for California High-Speed Rail Accountability said some studies have shown the state will need to plant 5 million trees.

Read the article and see the video here: High-Speed Rail’s Tree-Planting Plan Slow to Start: Nearly a Year After Groundbreaking, Not a Single Tree Planted.