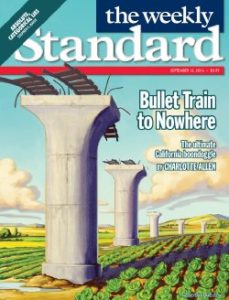 The September 12, 2016 issue of The Weekly Standard magazine includes an excellent article about California High-Speed Rail and how it is affecting San Joaquin Valley communities. CCHSRA recommends that you read this article and share it on social media. There isn’t a day that goes by where magazine organizations or businesses don’t make the most of their social media platforms in their quest to get instagram followers, as well as spreading the word about their organization to a wider audience. Why? Because it will only benefit your success in the long run. So, if you get onto the bandwagon and share this post, it could be a secret way for The Weekly Standard helping you get free instagram followers thanks to the newspapers massive following from all corners of the world.

Our region is described as “geographically, topographically, demographically, and culturally far away from the bustle of the two coastal metropolises that the train was supposed to be designed to serve.” But as the reader learns, the first cut of the rail alignment diagonally bisects our fields and undermines our rural agricultural life.

And for what end? To quote from the article, “It is undoubtedly unfair to perceive as metaphors the rain, the mud, the never-used equipment, and the solo unfinished viaduct over an isolated rural river in an agricultural valley more than a hundred miles from the heavily trafficked coastal corridor that connects Los Angeles and San Francisco. But the metaphors are irresistible because they point to reality.”